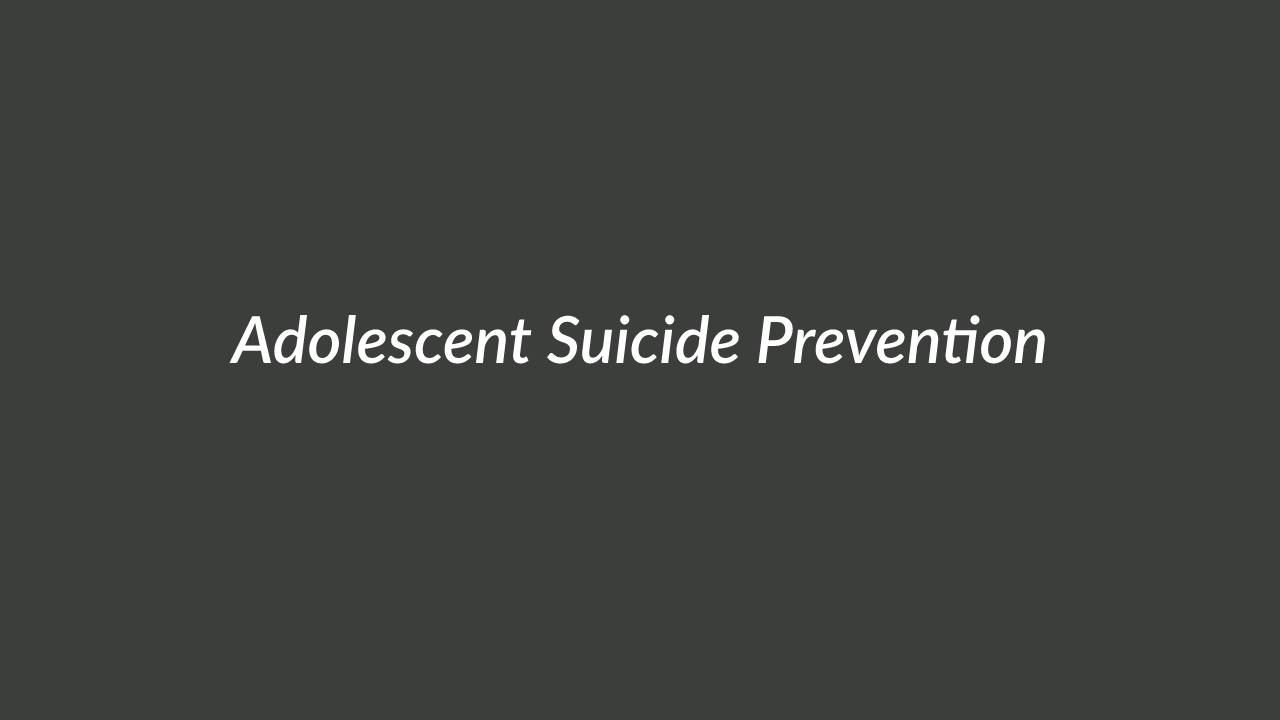 Suicide is an enormous public concern, as it reflexes the health condition of the community as a whole. Unfortunately, adolescent suicide is quite a common problem. According to the National Center for Injury Prevention and Control (2015), “Suicide is the third leading cause of death among persons aged 10-14, the second among persons aged 15-34 years” (p. 1). It may seem that self-murder among youngsters affects only those who attempt it, but it is a misconception since it is a tragedy for family, society and for a person who preferred death to life. Suicide is a phenomenon that can be prevented if people are aware of the risk factors, signs, the model of suicidal behavior and the ways to stop it.

A desire of a teenager or any individual to end one’s life is only an ‘exterior’ of the problem. It usually leads to a number of mental concerns and social misunderstanding, so realization of risk factors can help to indicate this issue on time. The most common risk factors of adolescent suicide include previous attempts to die by one’s own hands (or certain suicide history in the family), recent loss or great stress, mental illness, depression (especially the long-term one). In addition, societal acceptance has the significant influence on the suicidal thoughts, particularly if a juvenile struggles to find a life mission or confronts gender-related issues. Other reasons that must be considered are bullying, abuse, domestic violence, low self-esteem, helplessness, and lack of social or adult support. The abovementioned items are the warning signs for parents and the community that teenagers need proper endorsement and assistance.

The model of behavior and the evidence demonstrated by the adolescent with suicidal tendency can be manifested in numerous and contradicting ways. As noted by the American Academy of Pediatrics, behavioral signs of suicidal inclination are “truancy, deterioration in academic performance, running away from home, defiance of authorities, self-destructive behavior, vandalism, alcohol and other drug abuse, sexual acting out, and delinquency” (As cited in Shain, 2016, p. 5). It is quite common for youngsters to show the symptoms of depression, namely exhaustion, the loss or gain of weight, indifference to interests. Lack or abundance of sleep as well as helplessness, breakouts of crying or insensibility complement the list of the warning signs. One can often hear the public point of view that teenagers are maximalists; therefore, all these suicidal talks, thoughts and failed attempts are aimed at capturing attention. However, if the juvenile feels depressed and has low self-esteem due to the neglect, support is the least that parents can provide.

It is possible to avoid adolescent suicide by using an individual strategy of communication with the young ones. Preventing methods for self-murder among youngsters can be divided into population-based measures and at-risk group measures. (Hawton, Saunders, & O’Connor, 2012). The former need participation of educational institutions and society in promoting psychological support, counseling, reducing bullying and encouraging normal self-esteem as well as gatekeeper training. With regard to at-risk group measures the preventing strategy involves psychological intervention, screening, counseling and in some cases medical treatment. Eliminating the access to potentially harmful objects such as firearms or pills is also considered a preventing method. Parents need to provide more attention and encouragement to the problems or concerns of their children by treating them with equality, respect and sense of self-value.

It is important for the society not to abandon juveniles in times of trouble. Adolescent suicide is a multifold issue that usually conceals helplessness caused by alienation from the community in addition to depression and other problems that a young person should be protected from. However, if parents and the public provide enough support, attention and help to teenagers who demonstrate the sings of suicide tendency, self-harm can be prevented. Thus, everyone deserves to have a happy life.