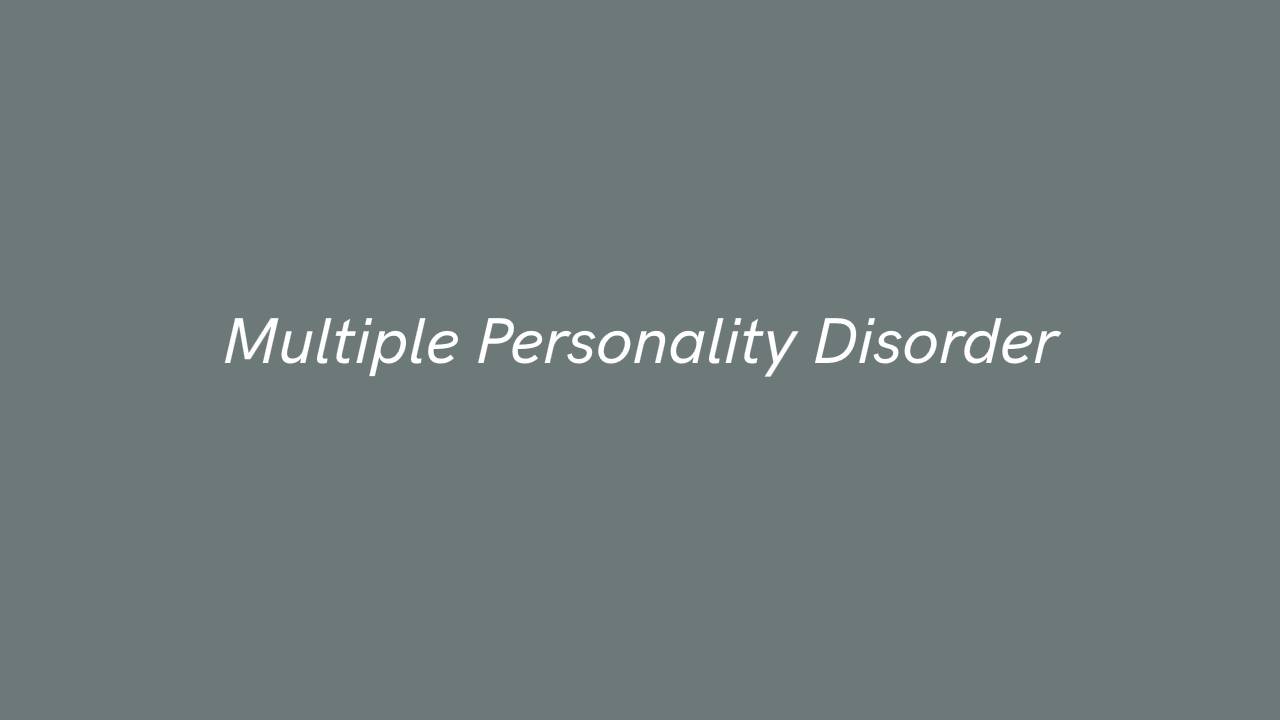 Multiple Personality Disorder, also known as Dissociative Identity Disorder, has been described as a complex mental health problem manifesting itself with the dissociation of the personality. Although being not quite well learnt at the moment, it attracts much of medical scientists’ and practitioners’ attention. This paper will try to provide the present information on this disease.

Multiple Personality Disorder (MPD) changes the individual living experience. The person can be depersonalized, a condition in which they are detached from his or her body. Another variant might occur through identity alteration, when a person gets confused and does not know who they are. People with MPD exhibit different personalities, which frequently emerge during different times and on different situations. Moreover, multiple personalities should show a pattern of controlling the behavior of that individual. The main distinguishing feature in MPD is that some of the personalities are not aware of other’s existence, and therefore the dominating figure will have a challenge of cooperation with them.

Multiple Personality Disorder has various symptoms, including suicidal thoughts, amnesia, affective disturbance and auditory hallucinations. This disease may also show signs of fragmentation as compared to the proliferation of separate personalities. At times when in control, every personality may want to dominate, and is associated with certain factors like distinct self-image, identity or history. It is evident that some stressors or circumstances can make an individual later to emerge (Petersen et al. 135). These different types of personalities may deny the knowledge of the other personality, and this can trigger open conflict.

Research studies have attributed multiple personalities as a phenomenon received from the social role and the individuals’ culture. When an individual cannot recall their personalities, dissociation does allow the victim at least to preserve one of the personalities to remain intact. From studies undertaken before, MPD has been associated with psychological response to environmental, interpersonal and intrapersonal stresses, particularly during the early stages of life when a child can experience emotional neglect and sometimes abuse of this child can interfere with his or her development. About 99( of persons who have developed this disorder have experienced personal histories of recurring and life-threatening disturbances (Petersen et al. 135).

Some psychiatrists believe there is little evidence to perceive MPD as a separate disorder, and there are two reasons for this. Firstly, some diagnoses are varying according to cultural conditions. Secondly, many of the clinical symptoms of this disease have been diagnosed with several other diseases that had previously affected an individual, and arguably they don’t give much information about mental health. Moreover, there is a lack of convincing physiological evidence as well as poor quality of scientific proofs. Consequently, the study of MPD cases indicate that misdiagnosis is frequent and thus patients with the disorder may stay for up to seven years in mental health system before getting the correct diagnosis.

However, Brad Foote with his colleagues suggested to those practitioners, who are skeptical about this disorder, to have a counter transference a situation in which the person having therapy influences psychologist’s emotions. This event will make individuals with this disorder to show their negative reaction, and this will be able to reveal different personalities found in the individual.

However, recently the disorder has been given a more precise diagnosis. It has been outlined that a patient must possess a minimum of two personalities, by determining if the two characters have unique perceptions. It is evident that during the early diagnosis, on average there are two to four personalities, but as treatment continues, there is the increase of characters on average ranging from 13 to 15 personalities (Cloninger et al. 547).

MPD does not have a long-term treatment, which can be really helpful. Nevertheless, there are short-term treatments available including the talk therapy, adjunctive therapies, and psychotherapy (Neppe 165). Although in reality, there is no established medication for this disorder. Nevertheless, the co-occurring disorders such as depression should be treated if the medicine is available, as it is essential for the overall improvement.

Neppe, V. M. “Paroxysmal Disorders in Neuropsychiatry: Why Episodic Disorders Must Be Accounted for.” Journal of Psychology and Clinical Psychiatry, 3.5, 2015, p. 165.