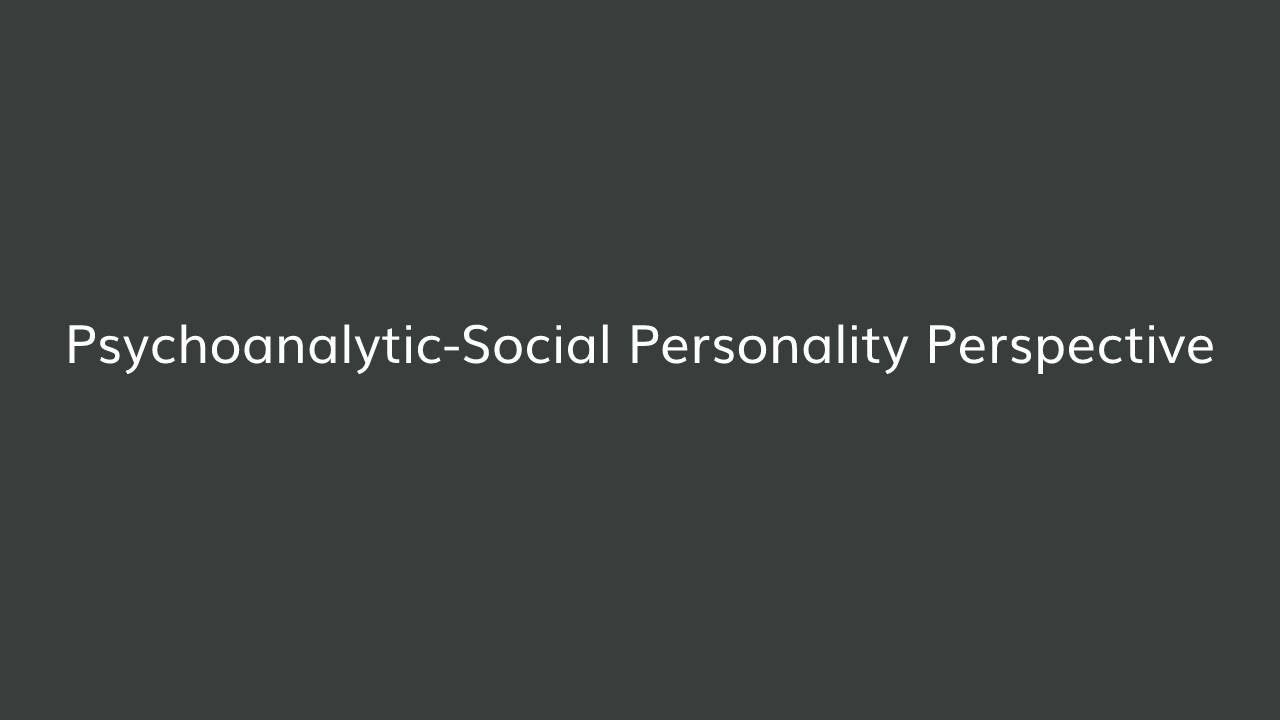 The study of personality prospective has not become less important throughout hundreds of years because it can be used to better understand who people really are. As a result, it is one of the major topics of interest within psychology. Nowadays, there exist many personality theories, and most of them consider or highlight one of four major perspectives. Each of these four perspectives describes various patterns in personality, including people’s differentiation on an individual level.

Psychoanalytic-social perspective of personality is unique because it is constructed on culture and social environment. The cultural and social conditions, particularly the experiences and knowledge one would have during their childhood, play a vital role in shaping an individual’s personality. For example, when a child did not have his or her needs for love and care fulfilled, later some kind of aggression can develop toward their parents or other relatives, the result of which can be anxiety. Such aspect of child’s behavior should be controlled by any cultural values and morals in early childhood; however, it is a very daunting task to complete (S?dhof, 2016).

Speaking about the four main personality theories, they include the psychoanalytic, social cognitive perspective, trait perspective, and humanistic perspectives. All these perspectives have a common goal of discovering different aspects of personality, finding how they can be formed, and what makes people unique. The main components of psychoanalytic-social personality theories are ego, interpersonal relationships, social and cultural factors. Ego is a physical energy in personality. Interpersonal relationships deal with connections with individual’s parents. Social and cultural factors characterize personality in valuable ways (Deutsch, 1999).

Despite the common objective of every psychoanalytic-social personality theory, there still exist some differences between the names of the theory stages and the issues that are searched during each stage. Such differences may be partly explained because each psychologist advocates his own unique opinion of what drives an individual’s evolution. For example, Freud emphasizes the importance of basic needs and biological forces. At the same time, Erikson’s theory is built on social and environmental principles. Another striking difference in personality theories can be the target age. In particular, Freud studies the early period of person’s development unlike Erikson, who expands his theory into adulthood (Ahmed, 2012).

As Erikson’s psychoanalytic-social personality theory is based on adulthood period, it is a better variant to identify my personality. According to this theory, there is a psychosocial crisis at every stage, which has a positive or negative influence on the development of personality. The theory includes eight stages, and each of them develops in a person particular feelings and morals such as trust in others or sense of identity in society. At the first stage, a person develops trust or mistrust towards the world. I surely can claim that thanks to my loving parents, I have learned to feel secure. The second stage, which covers the age of three years and anticipates becoming autonomous, is also successfully completed. Speaking about the third and the fourth stages, their objective are initiative and competence acquirement. Thus, at that age, I regularly interacted with other children at school, did many activities, played games and learned to do things on my own. At the fifth stage (12-18 years), a person usually discovers his/her self and personal identity through the exploration of personal beliefs, values, and goals. I also tried to discover my personality through various activities and goal setting. The sixth stage that includes the period of 18-40 years is the most important for me now as it implies establishing our careers, settling down within a relationship, and developing a sense of being a part of the bigger picture; so, I am in an active search of my better future.

In conclusion, psychoanalytic-social perspective of personality theories helps understand why people react differently in similar situations as well as the consistency of their responses. Such theories aim at explaining which external or internal factors of the individual cause various actions, feelings, or beliefs.

Deutsch, M. (1999). A Personal perspective on the development of social psychology in the twentieth century. In Rodriguez, A. and Levine, R. V. (Eds.), Reflections on 100 Years of Experimental Social Psychology, New York, NY: Basic Books, 1-34.