Phobia as a Common Type of Mental Disorder

Home › Psychology › Phobia as a Common Type of Mental Disorder 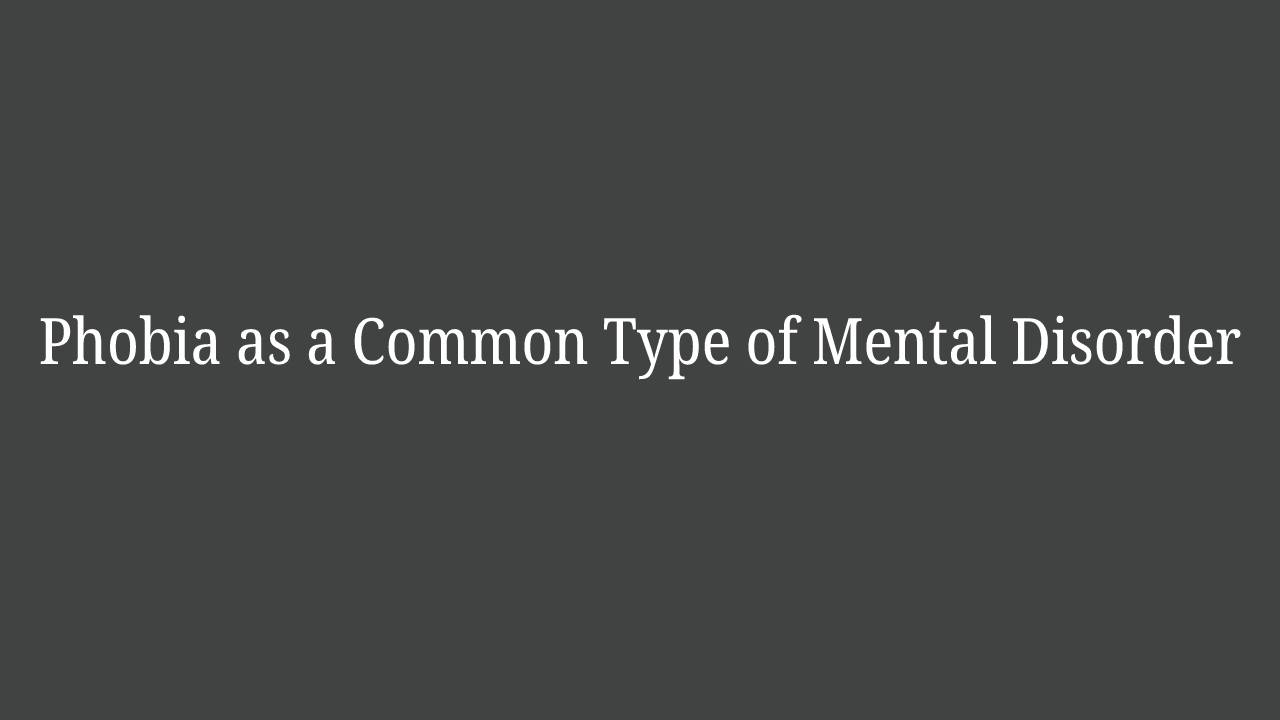 Numerous studies have been conducted on various mental changes caused by a phobia. Ranta, La Greca, Garcia-Lopez, and Marttunen (2015) suggest that a phobia presupposes the strong fear of something that, in reality, poses no actual danger. According to their study, a phobia may be connected with various objects or situations such as heights, needles, highway driving, snakes, closed-in places, and flying insects. Hersen and Hasselt (1996) state that in most cases phobia develops in early childhood and can worsen in adulthood. However, some individuals can experience extreme fear regardless of their age or mental development. As a rule, phobias lead to painful and dire consequences in all aspects of life: at home, at work, and during interaction with others. The mental effects of phobia are triggered by the fear of public performances, interaction with individuals, animals, and other irritants.

Ranta et al. (2015) claim that for the vast majority of ordinary people it is very difficult to realize how dramatically phobias can change a person’s life. This feeling involves mental and physical tension that helps an individual to get prepared to protect himself/herself from something terrifying. There are no exact factors that lead to phobias, but they are mostly caused by a mix of physical and mental health problems, stressful situations, and frightening events. A phobia affects the mental and physical health of every person and hinders the achievement of different goals.

All kinds of phobias are considered to be anxiety disorders which are based on sudden and unreasonable panic attacks. Hersen and Hasselt (1996) state that the discovery of the brain basis of fear and neurocircuitry originally stems from animal research. For more than 30 years, scientists have examined the neurological underpinnings of severe fear in laboratory rats (Hersen & Hasselt, 1996). The workhorse paradigm has been applied to experimental rats in order to show that the symptoms of unreasonable fear appear due to a neutral stimulus and something aversive, like an electric shock (Hersen & Hasselt, 1996). Numerous studies have revealed that phobias and other types of anxiety disorders develop due to dysfunction in related brain areas. Finally, the examination of the brain has broadened people’s understanding of many anxiety disorders, particularly phobias.

Ranta et al. (2015) state that people with sudden panic attacks and fears are at high risk of being affected by different types of phobias. A phobia is marked by sudden, recurrent, and extreme feelings of panic and terror which are blended with persistent anxiety about having a relapse or changes in mental health as a result of this relapse (Ranta et al., 2015). Consequently, a phobia can lead to several unpleasant physical symptoms such as irregular heartbeats, faintness, dizziness, weakness, and increased perspiration. As it has already been mentioned, in most cases, phobias are triggered by exposure to situations or things that people fear. Therefore, individuals try to avoid such situations and things that can frighten them or cause stress.

The authors examine different kinds of phobias and their influence on the mental health of a person. Taking into account the aforementioned data and the main factors that may lead to the progression of phobias, it is possible to create the complete picture of mental effects of phobias on human consciousness and prove the important role of timely diagnosis and treatment.

Social phobias cover almost all social situations outside of family interactions and may be associated with the fear of criticism and low self-esteem. People who suffer from social phobias try to avoid communication with others, which often leads to social isolation. Additionally, another type of social phobia may appear in people who are usually comfortable with informal communication but feel excessive nervousness, confusion, and anxiety when they are in the center of attention (Ranta et al., 2015). When individuals suffer from social phobias, the feelings connected with nervousness or fear fundamentally differ from those felt by healthy people. As a rule, social phobias are likely to affect people who should speak or perform in public.

Agoraphobia is one of the most common types of phobias when an individual experiences a panic attack that leads to seclusion or embarrassment. People who suffer from this type of phobia fear the anticipated or actual situation such as being in open or enclosed spaces, using public transportation, being in a crowd, or standing in a line (Hersen & Hasselt, 1996). Most people who have agoraphobia develop it after having numerous panic attacks. People with this mental disorder often do not feel safe in any public place, especially where crowds gather. What is more, the fear can be so overwhelming that a person may be afraid to leave home. Thus, agoraphobia treatment can be challenging because an individual should confront his/her fears to receive medical care. Individual approaches should be used to help patients to overcome agoraphobia (Hersen & Hasselt, 1996).All in all, agoraphobia may cause a negative effect on the mental state of individuals and prevent them from leading normal lives.

The specific phobia is defined as an unreasonable and lasting fear caused by the presence of negative thoughts about a particular object or situation that poses little or no actual danger. Exposure to the situation or object leads to an instantaneous response, making an individual feel intense nervousness or deliberately avoid the situation or object (Hersen & Hasselt, 2013). Furthermore, stresses connected with the phobia and the strong desire to avoid the situation or object can considerably interfere with a person’s ability to think sensibly and make reasonable decisions. The vast majority of adults with a specific phobia recognize that their fear can be unreasonable or excessive, yet they are unable to overcome it. There are different kinds of specific phobias based on the situation or object feared. While some phobias arise in childhood, others suddenly appear during early adulthood (Hersen & Hasselt, 1996). Therefore, their manifestation is usually unexpected, and they may occur in situations that previously did not create any anxiety or discomfort. Specific phobias can be connected with the fear of germs, animals, insects, heights, driving, thunder, public transportation, flying, medical procedures, elevators, etc. It may be concluded that people with specific phobias realize that their fear is irrational, thinking that it can lead to mental disorders.

In conclusion, a phobia is the most common type of mental disorders triggered by different individual and social factors. It is characterized by the intense, enduring fear of particular situations or objects that may cause distress or panic attacks. Medical specialists identify three basic types of phobias that affect mental health. The first type is agoraphobia which makes individuals avoid public places and activities that may lead to panic attacks. The second one is social phobias which appear when a person has a persistent fear of some social situations such as having a conversation with unfamiliar individuals or performing in public. The last type is specific phobias which are characterized by a great fear of specific situations and objects that may cause serious mental disorders. All in all, a phobia is one of the most common mental illnesses that lead to the irrational fear of a situation or object.