Is Psychology a Science? 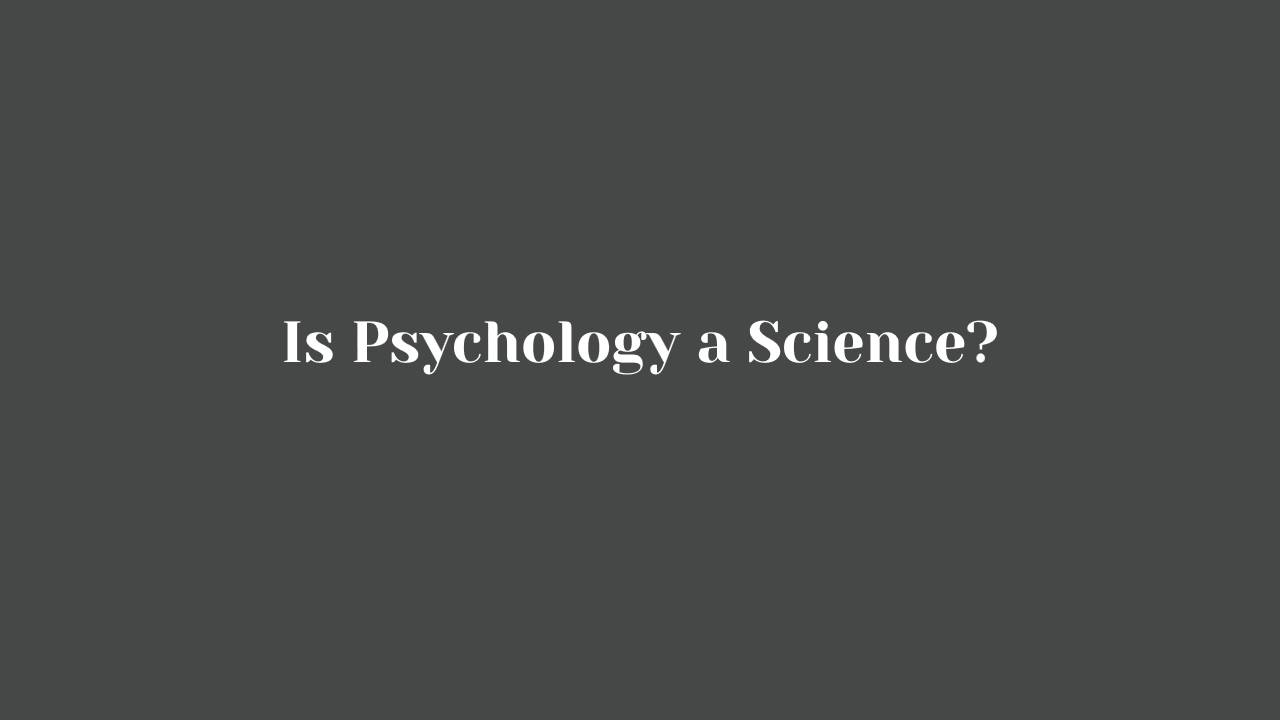 Psychology can be considered as a social science since it primarily involves the scientific study of cognitive processes, behaviors, and experiences. Because psychologists use some therapeutic techniques, many people tend to believe that psychology is not a science. However, there is evidence of psychology being a science: it builds and organizes knowledge through a scientific study of behaviors and mental functions. This paper explains the pros and cons of psychology as a science and provides the reasons why psychology should be considered a science.

The Advantages of Psychology

First, through the scientific knowledge, psychologists analyze the relationship between behavior and brain function as well as between the environment and behavior. Psychology as a science utilizes empirical methods, which are useful in collecting and interpreting research data, to comprehend and solve the most challenging problems in the society. Besides, psychologists use various scientific methods, which include askng questions, formulating theories, and then conducting in-depth field or laboratory experiments (Henriques, 2016). Thus, psychology as a science is important since it applies the research findings to formulate evidence-based strategies, which are instrumental in solving problems and improving lives.

The second advantage is that psychology as science reveals different and better ways for human beings to live and thrive in a complex world. Mostly, psychologists work as health care practitioners, whose central role is to examine the behavioral and mental function and individuals’ well-being. Apparently, the application of psychological research can help minimize the economic burden of disease on the society and government since people can learn how to make practical choices to enhance their health and well-being (Harre, 2016). Consequently, the significant discoveries in the educational assessments have helped students to learn their incapacities. Moreover, psychological science plays a vital role in promoting justice in courts since the judges can understand the motivation of criminals.

The third significant advantage of psychology as a science is the use of different scientific approaches. In particular, psychoanalysis is a psychological approach that plays a vital role in understanding behavior. Moreover, cognitive psychology adopts a scientific approach to un-examinable psychological processes by involving specific models and carrying out experiments with behavior (Harre, 2016). Through experimental psychology, educators are now able to understand how learners think, process, and remember which contributes to designing efficient teaching methods. Another approach in scientific psychology is behaviorism, which encompasses different theories of learning and utilizes some simple principles to explain a huge variety of behaviors from moral development to language acquisition (Henriques, 2016). Through this approach, psychologists are can explain different human behaviors and thus, are able to draw conclusions.

The Disadvantages of Psychology

The first drawback is connected to psychology presuming that there are particular regulations of human behavior. Thus, science adopts both reductionist and deterministic methodology, which psychology fails to consider (Henriques, 2016). Consequently, overt behavior in science is empirically examinable and can be measured, thus allowing psychologists to record their findings and agree on the observations.

The second limitation of psychology as a science is that psychological explanations are usually limited to a particular time and place whereas scientific laws are generalized. Moreover, psychology cannot be applied to a social space since behavior often varies under different circumstances. These factors together with particular differences make the research findings dependable on certain conditions (McLeod, 2008). Another disadvantage of psychology as a science is based on the scientific approaches that are used. For example, psychoanalysis has been criticized for describing behavior only after the event and not being able to predict what may happen. Consequently, this scientific psychological approach has been criticized for being falsifiable. Apparently, the psychoanalysis approach in psychology has been criticized as being more of a religion than a science.

The next limitation of psychology is the impossibility of objectivity. Since humans study humans, it is difficult to explore the conduct of individuals in an impartial fashion. Besides, regarding the overall philosophy of science, it becomes difficult to be objective because people are subjective from a theoretical point of view. In this case, the observer and the observed are considered as part of the same species, which leads to the problems of reflectivity (McLeod, 2008). Moreover, psychology as a science comprises of several paradigms that make it a pre-science till it becomes more unified.

Apart from the lack of objectivity in psychology, testability becomes a problem because the subject matter is unobservable. For instance, psychologists are not able to observe someone’s memory. Thus, the subject matter cannot be precisely measured, which limits the effectiveness of psychology as a science. Moreover, there are many variables that affect human behavior, and it may not be easy for psychologists to consider all these variables. Apparently, it becomes difficult to control them, which in turn contributes to the ineffectiveness of psychology as a science. Another shortcoming of psychology as a science is the fact that it does focus on scientific principles to analyze the whole world (McLeod, 2008). In many fields of psychology, there are few attempts to simplify and generalize particular human behaviors to a single behavior pattern.

The Arguments for Psychology Being a Science

The main argument why psychology should be regarded as a science is that it utilizes empirical approach. According to the concept of empiricism, the source of knowledge comes from senses. This perception opposes the notion that knowledge could be acquired through the power of logical argument and reason. Apparently, empiricism is the concept that all knowledge can be based on because it comes from experience. Consequently, the nature of psychology as a science can be considered on two significant levels. The first level deals with theory and the foundation of hypotheses while the second is based on the definite empirical methods of inquiry (McLeod, 2008).

The second argument concerns the empirical research: the key empirical technique of inquiry in science is research, which in most cases, psychology utilizes as well as experiments to draw conclusions. Psychologists have also argued that psychology should be handled as a science since there are alternatives to empiricism. These options may include argument, rational research, and belief. As a result, a humanistic approach purports that objective reality is not essential compared to a person’s personal insight and a special understanding of the world.

Third, psychology can be considered as a science because it fulfills the conditions of the concept of science. The most obvious one is that it uses systematic and objective methods. It also analyzes the cause-and-effect relations in order to create universal laws that govern human behavior. Besides, the findings of psychological experiments can be verified, thus justifying it as a science. However, it is vital to point out that psychology cannot be compared to natural sciences, such as chemistry, physics, or biology (Harre, 2016).

The Arguments against Psychology Being a Science

The first major argument against psychology being a science is psychology dealing solely with behaviors and mental processes. In this case, behavior and dynamics are unlike the aspects of natural sciences. The laws of physical sciences do not apply to the laws in psychology because the cognitive processes that are studied in psychology are abstract and are always in a state of ever-changing interactions. Therefore, from this perspective, psychology cannot be considered a science.

Second, psychology is a social science that entails the study of human behavior and natural occurrences after keen observations. Psychologists then make their suppositions regarding a particular human behavior, such as people’s response to traumatic images. It is different from what is normally considered science. Researchers examine real concepts based on previous assumptions. After proposing hypotheses, psychological researchers utilize another scientific approach to test their hypotheses empirically. Consequently, the psychologists include variables and controls.

Third, psychological researches lack objectivity, which is vital for preventing biases within the study. From the experiments, the psychologists decide whether to accept or reject hypotheses (Harre, 2016). Afterward, the researchers would do additional tests to enhance the validity of the assumptions. Thus, it is clear that psychology lacks key practical approaches that make it a science.

Position Regarding Psychology as a Science

It is evident that the primary factor that distinguishes psychology as a science is the testing of theories. These approaches allow researchers or psychologists to establish a specific and testable hypothesis. In this case, the pursuit of scientific knowledge is facilitated through the development of a correct hypothesis from a theory. Notably, there are various areas of psychology that describe behavior but from somewhat different perspectives. One of this areas is social psychology, which attempts to explain the effects of social institutions on individuals behavior. There is also developmental psychology, which is based on the study of processes and principles that bring about change in life.

To conclude, psychology is considered a science mainly because it utilizes scientific research. On the other hand, the main arguments against psychology being a science include it being occupied solely with behavior and mental processes and not substantial matters. In addition, psychological research involves empirical methodology but lacks objectivity. Nevertheless, it is evident that there are various pros and cons of psychology as a science. The major advantage is that psychology as a science utilizes empirical methods, which are useful in collecting and interpreting research data. Thus, psychology is aimed at understanding better and solving the most challenging problems in the society.

Henriques, G. (2016). The “Is psychology a science?” debate. Psychology Today. Retrieved from https://www.psychologytoday.com/blog/theory-knowledge/201601/the-is-psychology-science-debate

McLeod, S. (2008). Psychology as a science. Simply Psychology.Retrieved from http://www.simplypsychology.org/science-psychology.html