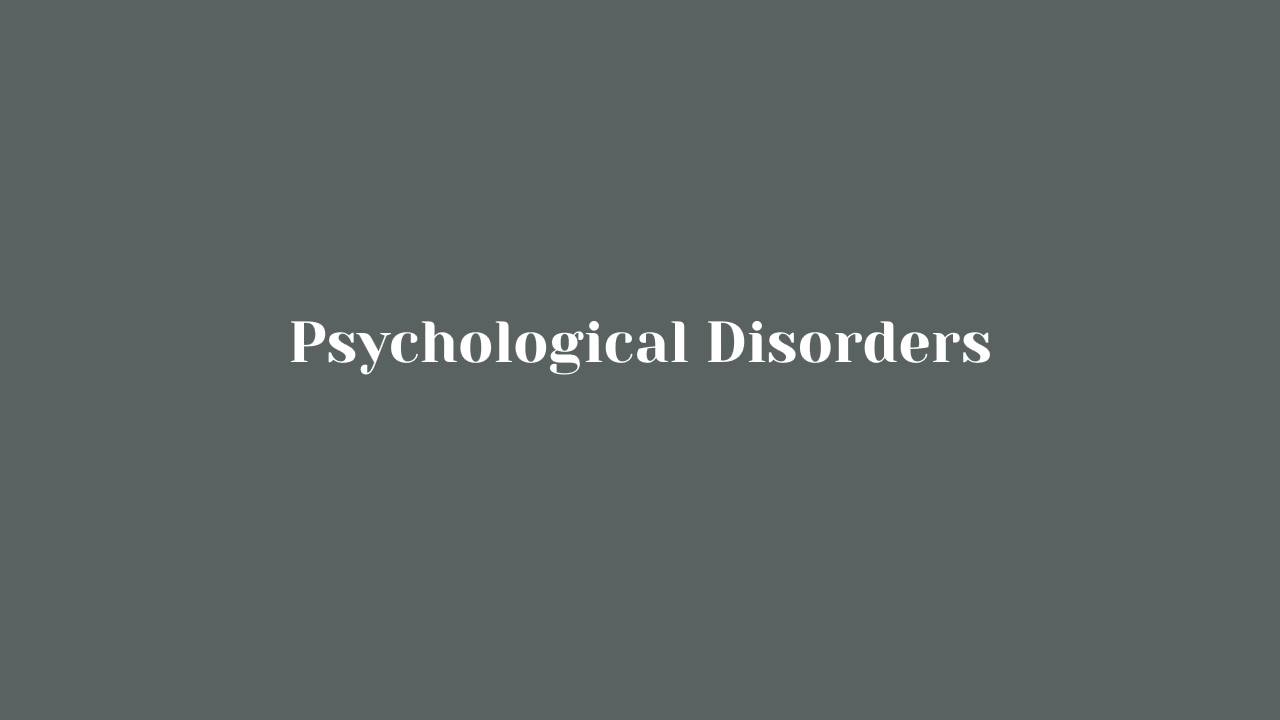 The issue of mental health of individuals is vital in terms of their adaptation to social environment and ability to maintain daily routine procedures without any obstacles. In this regard, research and treatment of psychological disorders is important for benefit of society and concrete persons suffering from mental disorders. The paper considers the concept of psychological disorders, examines their categorization in relation to the particular types, and ways the specialists may diagnose them.

In order to define a psychological disorder, primarily one should apply the statics and determine the ways of conduct usual for the vast majority of individuals. Consequently, the cases of abnormal behavior would be attributed either to special talents and gifts of the person or to mental disorders. The most important point in determination of abnormal behavior as mental disorder is whether the person suffers from it, and whether it prevents the normal and efficient application of different procedures performed by individual that are common for the majority of people. Therefore, one comes to definition of psychological disorder as a pattern of conduct that generates distress for a person and negatively influences multiple areas of life (American Psychiatric Association, 2013). Psychological disorders, however, can be classified on the basis of their distinctive features. In this case, one can find a list of major psychological disorders in the Diagnostic and Statistical Manual of Mental Disorders.

The first group of disorders to be described is bipolar disorders, among which are depressive episodes and mania (Bipolar Disorder). Basically, depressive episodes are usually marked by feelings of sadness or guilty, which are not based on the objective reasons, but make the person unhappy and can cause the problems with sleeping or even motivate individual to committing a suicide. On the other hand, mania is marked by excessive excitements of the person over the certain activities, and can lead to the extreme confidence and stimulate the person to commit actions that are immoral or unlawful.

Another group is neurodevelopmental disorders. In fact, intellectual developmental disorder can be determined via IQ tests when the person shows results lower than 75. Those individuals experience poor social skills and can fail even in the issues of self-care and every-day practices. Further, communication disorders touch the problems of individuals to use or understand speech and language. For instance, autism spectrum disorders enable people fully perform social interaction and communication, and are harmful for various spheres of live of individuals. Next, hyperactivity disorders are often marked by the deficit of attention and can lead to the problems in social interaction in academic and occupational spheres.

The third large group, which is anxiety disorders, encompasses such problems as phobias and panic disorders. In this case, the first ones, among which are agoraphobia, separation anxiety disorder, and specific phobias, are marked by the extreme fear of certain satiations, events or objects that cause rapid heart rate, trembling or may have the other negative effects on the person. In their turn, panic disorders involve the emergence of panic attacks with no reasons and can prevent people from performing usual activities such as driving or other routines.

Addictive disorders refer to individual’s addictions to alcohol, tobacco, cannabis or stimulators. Obviously, the excessive consumption of these products negatively affect individual, and can influence all the spheres of person’s life.

Dissociative disorders, however, include dissociative identity disorders and dissociative amnesia. The first group of problems is often defined as multiple personality disorder which is marked by the presence of several personalities in one person. Admittedly, people with such disorders usually show different patterns of conduct for every personality, and it prevents them from normal social functioning. Dissociative amnesia can be attributed as a memory loss for undefined period of time as a result of psychological trauma.

Trauma and stressor-related disorders can be divided into adjustment disorders, acute stress disorders, and post-traumatic stress disorders. All of them appear in response to stressful events in the life of an individual, and result into depressed mood, anxiety, nightmares, bursts of anger, and other patterns of conduct. Such condition may distort a normal behavior of individual and prevent it from successful performance in social and occupational activities.

Feeding and eating disorders constitute the separate group of disorders among which the most often are bulimia nervosa, anorexia nervosa, and pica. The first problem involves extreme over-eating and different compensatory mechanisms, such as vomiting or excessive exercises, which are harmful to the person. On the other hand, people suffering from anorexia usually consider themselves being too fat, and it leads to the extreme weight loss and, therefore, to low body mass. Finally, when suffering pica disorders, individuals consume items that should not be eaten such as dirt, soap, and others.

Insomnia disorder and narcolepsy can be referred to sleep disorders. When suffering from such sleep disorder, person cannot fall asleep and it expresses into the significant distress. On the contrary, people diagnosed with narcolepsy always feel tired and want to sleep. Therefore, they show low productivity, bad mood, and are subjected to depressions.

It is very important to notice the first signs than can be the symptoms of certain psychological disorders in individual’s behavior as early as possible. In this case, the specialist is to compare individual’s symptoms with those attributed to the certain types of psychological disorders and to diagnose the problem (Cherry, 2016). The most common for the United States are anxiety disorders, followed by mood and impulse control problems (Global Leading Categories of Diseases/Disorders).

In conclusion, psychological disorders are experienced by a large number of individuals and may worsen their lives due to inability to perform different activities properly. Basically, they can be divided by their distinguished features on different categories, among which are various types of disorders, namely bipolar, neurodevelopmental, addictive, dissociative and anxiety disorders, trauma and stressor-related problems, and lastly disorders with feeding, eating and sleep. In order to diagnose any type of psychological disorders, the specialist should precisely examine all the symptoms and compare them to the ones observed in certain disorders.

Cherry Kendra. “What Is the Diagnostic and Statistical Manual (DSM)?” Verywell, 30 Aug. 2016. Retrieved from www.verywell.com/the-diagnostic-and-statistical-manual-dsm-2795758.